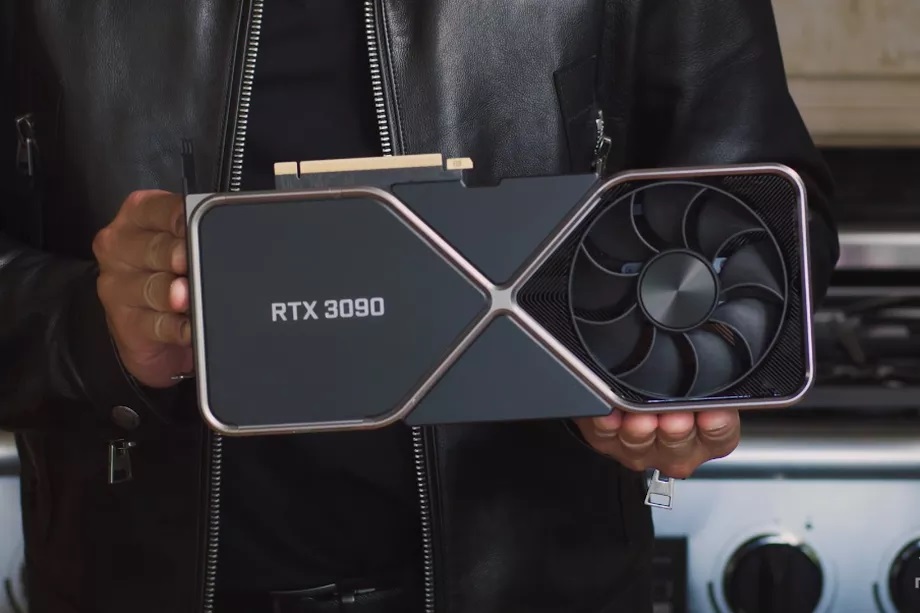 Nvidia might have just announced its RTX 3080 successor to the RTX 2080, but the company also had a surprise giant GPU ready: the RTX 3090. While the RTX 3080 will ship with 10GB of GDDR6X memory, the RTX 3090 ships with a huge 24GB of GDDR6X memory. Nvidia is promising that the RTX 3090 will be capable of 60fps gaming at 8K resolutions. This new flagship card is more akin to Nvidia’s Titan series and will ship on September 24th priced at $1,499.

The RTX 3090 is based on Nvidia’s Ampere GPU architecture, which promises some impressive performance gains for PC gaming and ray tracing. Nvidia claims the RTX 3090 is the “world’s first 8K gaming GPU,” with 8K HDR ShadowPlay support, HDMI 2.1, and a whole lot more. Nvidia is using 10,496 CUDA cores on the RTX 3090, combined with a boost clock of 1.70GHz and 24GB of GDDR6X memory.

Nvidia is labeling the RTX 3090 a “Big Ferocious GPU” (BFGPU). The card will occupy three slots and include a silencer to make it up to 10 times quieter than the existing Titan RTX graphics card. Nvidia says the RTX 3090 will also be up to 50 percent faster than the Titan RTX, and will require a 750-watt power supply. The card itself is expected to utilize around 350 watts of power.

While the RTX 3090 clearly promises big power, it’s also huge in physical dimensions, too. The card measures 313mm in length, compared to 285mm for the RTX 3080. It also occupies three slots compared to the more common two, meaning PC builders will have to consider which type of case to slot this into.

NVIDIA Reflex technology works to reduce e-sports game latency. Without elaborating, NVIDIA spoke of a feature that works to reduce input and display latencies “by up to 50%”. The first supported games will be Valorant, Apex Legends, Call of Duty Warzone, Destiny 2 and Fortnite—in September.

Nvidia only just announced this card alongside the RTX 3080, so we’re waiting to hear exactly what type of performance we can expect to see in regular games with and without ray tracing. Given the big promises of 8K gaming, this could be the card we’ve been waiting for to really push 4K gaming into higher frame rates and more reliable performance.

Nvidia launched its Ampere technology with the A100 data center processor. While the Ampere has a lot of new capabilities that aren’t strictly relevant in a consumer graphics card, it does build on Turing in several ways that can impact gaming performance.

NVIDIA is also launching NVIDIA Broadcast, a brand new app that will be available in September which is a turnkey solution to enhance video and audio streaming advantage of the AI capabilities of GeForce RTX. Which makes it easy to filter and improve your video, add AI-based backgrounds (static or animated), and builds on RTX Voice to filter out background noise from audio.